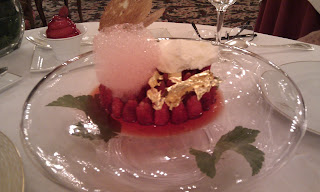 I confess to not having heard of David Lebovitz, the American pastry chef and cooking book author, who has lived in Paris since 1999. His book 'The Sweet Life in Paris' not only tells about personal adjustments required when living in Paris but also includes around 50 recipes.

In December David released his iPhone app 'Paris Pastry'. (I love my Android phone but sometimes I really wish I had the ubiquitous iPhone.) The paid app includes more than 300 pastry and chocolate shops in Paris. There is also a free 'lite' version which provides a free preview of the top 25. There are also plans to release an ebook version of the information later this month. It sounds like a very useful application but unfortunately early reviews on iTunes of the app are not favourable. People seem to be impressed with the contents but they note issues in the execution of the app. They say it keeps closing down and is slow to load. Problems with the maps are also noted. Quel dommage! Hopefully they will sort all of this out quickly.  With the plethora of smartphone applications for Paris I can see that the landscape of tourists clutching their guidebooks will be replaced with those glued to their telephone screens seeking out the hidden secrets of Paris.

What are your favourite smartphone applications you use when visiting France?  I plan to do a post on these in the future.