It doesn't matter how far in advance I plan my travel, I always find myself overwhelmed and stressed prior to leaving. My stress levels reached new peaks when I arrived at the airport in Adelaide, Australia for my flight to Paris, realising that I had left my coat at home. My wonderful mother returned to the house to recuperate it. It wasn't surprising therefore that I managed to sleep on both the 7 hour leg from Adelaide to Kuala Lumpur as well as the 13 hour one from Kuala Lumpur to Paris. The champagne on the flights probably helped me to sleep too.

Upon arrival at Paris airport passengars were given posies of lily of the valley as it was May Day. These flowers are traditionally given on May Day to bring good luck. Although the flight arrived in Paris very early in the morning VV (owner of Riad Sekkat in Marrakech) and her partner JeF collected me from the airport. VV's apartment is my base for my 3 months in France. I have never been personally collected from Charles de Gaulle airport before and I have to say I was really touched by the warmth of their welcome.
VV lives on the top 2 floors of a 4 storey building near the La Defense business district in Paris. Imagine my delight to see my name on the letterbox. In France, letters are only delivered to the people whose name is on the letterbox. The plant-filled apartment is light, airy and tastefully decorated. JeF popped down to the local boulangerie for fresh, warm croissants which we had with our coffee. The pastry was of course to die for.
My bedroom has a balcony which is dotted with many plant pots as is the large terrasse on the 4th floor.  It provided the perfect spot for catching the sun's ray. All of the warnings and predictions I had received regarding the weather were unfounded. Paris put on her very best weather for me and the May Day public holiday. VV and I enjoyed ourselves chatting away on the terrasse. It became so warm I had to replace my long sleeved T-shirt with a short-sleeved one. In the meantime, VV whipped up a mixed salad with goats cheese toasted on baguette. I don't know why, it may well be psychological, but I find the flavours of foods greatly accentuated when I am in France. The corn was sweeter, the hard-boiled egg yolks more yellow, the cheese more sharp and the bread... what can I say. I don't eat much bread at home, but when in France, I eagerly partake.
After lunch, we toured the surrounding Courbevoie area. Being May Day there were people selling posies of lily of the valley flower on nearly all of the corners in the commercial area. These were often Mum and Dad operations but they were interspersed by the larger, more expensive posies of the professional florists. 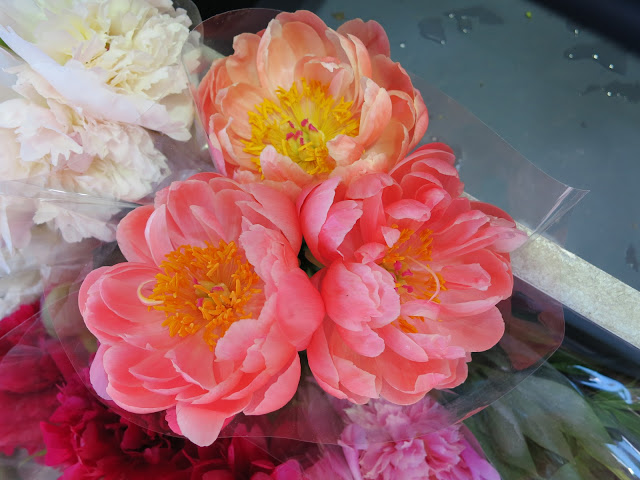 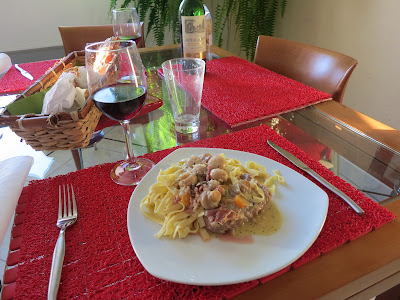 Dinner this evening started with rosé accompanied by foie gras on toast followed rôti de veau orloff. It was not a dish I was familiar with. The veal roast is slit to allow slices of comté cheese and bacon to be inserted. Bacon is also wrapped around the outside of the roast. The roast is then baked. I can see I am going to have to do lots of walking during my time in France!