Attending an Art Auction in Paris

Many guide books and blogs mention Drouot's auction house. In spite of numerous visits to Paris I had never considered going there myself. With the advantage of a lot more time available in Paris this visit it was time to put aside any feelings of trepidation and try it out.

Drouot's is in the 9th arrondissement not far from the Grands Magasins (major department stores). To get there I used Google Maps into which I have preloaded Paris on my smartphone in order to reduce the amount that I download when connecting to the internet. With a limit of 1GB per month and the drain on my battery I need to be careful wherever possible. It was easy to tell that I was heading in the right direction as the number of swanky antique shops swelled.

The building itself was a rather unremarkable relatively modern building for Paris. The footpath was packed with lots of smoking, dishevelled men in trench coats. I determined that these were antique dealers. I had already chosen my visit to coincide with a sale of 19th century artworks. The Drouot website has details and catalogues of all upcoming auctions. Directions were clearly displayed on television monitors. I mounted the escalator for the 1st floor. One by one the doors of the various rooms opened and people unashamedly pushed their way forward. The doors to Salle 4 did not open until after the designated time. Obviously Drouots works on French time. 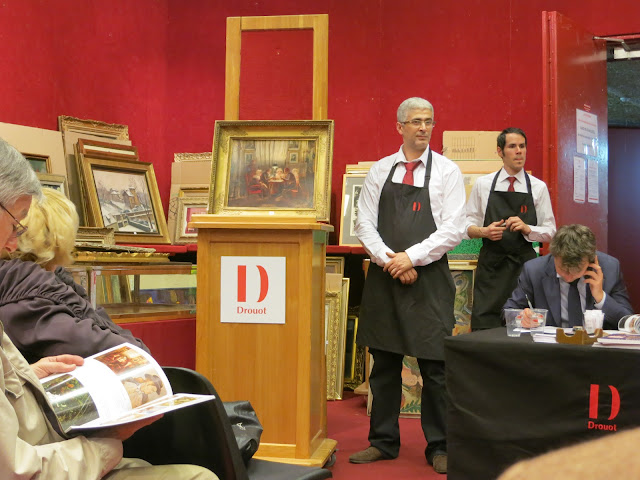 There were relatively few chairs for the large crowd. Most people had to stand. Having never before attended an auction I was surprised to see so many people involved with logistics. In addition to the auctioneer there were 3 people taking bids over the phone, another via the Internet on the Drouot Live website, one person taking payments, one who matched details of the buyer to the artwork and 3 who displayed and took away the works. The paintings were stacked higgledy piggledy in glass cabinets and against the deep red walls separated by scraps of cardboard carelessly thrown between the works.

To my surprise it is not necessary to register beforehand prior to bidding. It was tempting I admit to buy something. There were a few items as low as 60€. What fun it would be to say that you had bought it at auction in Paris!  The most was disappointingly only slightly more than 5,000€.

If your bid is successful, you are given a paddle (not sure of the correct name in either French or English) with a large number displayed on it which can be used to reference and group any further purchases. You can either pay and take your goods with you or you can place a deposit (amount dependent on the auction price) which you must then collect from another Parisian location. It was easy to tell who was French and who were the anglo-saxons. The French buyers would bring out their cheque books whilst the ango-saxons paid credit card. 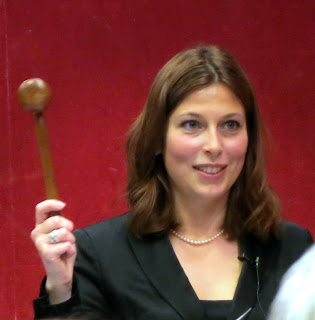 The auction, not surprisingly, was conducted entirely in French. It was very easy to follow as we were provided with a beautiful catalogue containing photos of all the works and there was a screen above the auctioneer showing the item for sale and details of the bids.

The people that I sat next to were Russian. Part way through the auction, the lady took out 6 boxes of chocolates and placed them on the tables in front of the people taking the bids. There was light-hearted banter about her trying to blackmail them. I think everyone was just as surprised as I was by her seemingly strange behaviour.  In fact, the whole event was much less formal and serious than I expected. Occasionally paintings were displayed the wrong way up (easy for me to tell - I just looked at the screen with the items and prices) or the image and the item number did not match. I didn't stay until the end of the auction - after 2 hours we were only about halfway through the listed items. Instead I moved to other auction rooms and found that they were even more light-hearted. In one room, there were about 10 men out the front standing next to the man holding up a watch to display. They basically bid and argued all from the front dais! In another, a man approached to try on a ring with a large diamond that was currently being auctioned. It was much more reverent in yet another room where I saw a sleek, but rather unspectacular art-deco desk being sold for 66,000€.

I found the entire visit very interesting. People move in and out of the rooms all the time, so you can easily come and go as you like without any self-consciousness. Likewise, you do not need to arrive at the designated time, but if you don't, then you can expect to have to stand.

I was unsure about rules regarding taking photos, so these are ones that I surreptitiously took and therefore are not particularly good.