Foire de Paris and Dinner at the Palais Royal

It worked out very well arriving in Paris early morning on the May Day public holiday. This allowed me to laze around on my first day. The following day JeF kindly helped me navigate the public transport options, mobile sim card and showed me around La Defense. La Grande Arche is certainly most impressive at 110 metres in height. Today it is only used for offices as the former museum, restaurant and viewing platform have been closed since April 2010 following an elevator accident.
On Thursday I visited the Foire de Paris with VV and JeF. I had never been to an exhibition on such a grand scale. There were seven main halls larger than football fields with everything from homewares, furniture, hobbies, items associated health and fitness, hobbies, cars, environment as well as another area with items from all over the world. The furniture exhibitors show off their products that have not yet been released in the shops. It provides a wonderful opportunity to see the future direction that furniture is taking. The quality and range of the products greatly exceeds anything that I have ever seen in Australia. The workmanship of some of the smaller locally produced products was absolutely breathtaking. I coudn't stop running my hand over tables, lounges and chairs to feel the smoothness of the finish.
What would be an exhibition without the obligatory people demonstrating and selling products. There were hundreds of them with the majority demonstrating the latest vegetable slicer, non-spill covers for food or system of compressing clothes, blankets etc in plastic. Watching them is like watching a magician as they work the crowds demonstrating the ease of use of the product. Of course when you buy the item and take it home it either doesn't work in the same easy manner or it breaks shortly afterwards. The advertising spiel spills forth without the need to draw breath. Most impressive was the demonstrator who was dumb and yet without words showed the advantages of his products.
Apart from the homewares and furniture I especially enjoyed the hall with the wines and regional food products. Exhibitors happily provided endless samples cheeses, wines, saucissons and foie gras. This then led to long, detailed earnest discussions about the relative merits of the products. VV mentioned to one wine-producer that I had given her some rosé from Australia. My lack of knowledge about the grape variety and method of production did nothing to impress him in regards to Australian wines. Being French of course it is not enough at lunchtime to make do with these samples and have a sausage sandwich. Full-scale restaurants were set up within the food and wine hall. There were restaurants which specialised in food from different regions, others oysters, foie gras etc. We bought baguettes with foie gras which were accompanied by a very smooth red from Cahors. We did a lot of walking visiting the exhibitions so my feet were very much worse for wear. I learnt a great new French expression: J'avais les pieds en compote. It doesn't have to be the feet. It basically refers to overdoing it with some part of the body and suffering the consequences. 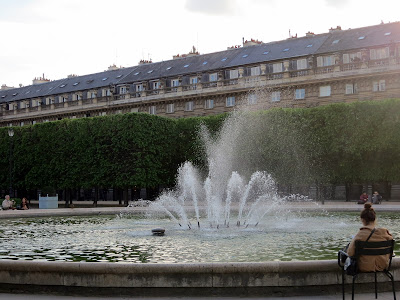 Later the same day it was time for one of the planned highlights of my trip. Earlier in the year I had met online Fraussie from the Aussie in France blog. I was fortunate to be invited to dine with her and her family in their Palais Royal apartment. Although Fraussie is very warm and friendly I was rather nervous as approached her quartier. This was to be the first time we had met face to face and it was be in her home in the Palais Royal. I arrived early so I wandered around her front garden. The sun reassuringly peeked out from behind the clouds. I clambered the four floors to her apartment and stopped in front of the entrance to capture my breath. One last deep breath and I pushed the 'Sonner' button. 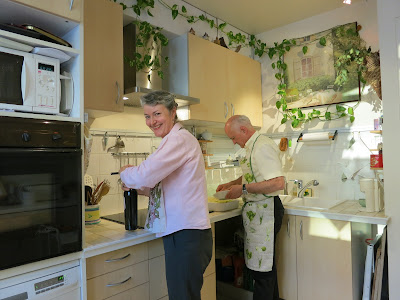 I needn't have worried. Fraussie and her family were charming. Brainy Pianist, their exchange student played the piano as I watched Fraussie and Relationnel prepare dinner. It was obvious that they often cook together as they expertly manoeuvred around the kitchen and each other. It was like watching the couple dance. It was a wonderful evening with lots of laughter, good food and wine and great company.
Publié par Femme Francophile à 05:34