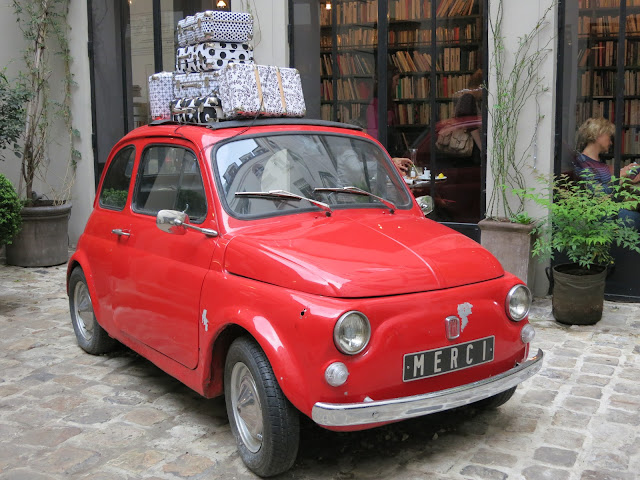 Friday was another big day for me in Paris. I had read lots of reports about the Merci concept store and was keen to check it out. With all the hype around the store I ended up being a little disappointed overall. Don't get me wrong, it is still definitely worth a visit. I understand that 100% of the profits from the store to associations which help women and children in Madagascar. The store itself is spread over 3 floors and it is flanked at the front by 2 of its cafés. I entered the store through the courtyard with its bright red car. The store sells everything from coat hangars made recycled carpet used at exhibitions to high end brands of clothing and shoes to vintage furniture. Many of the products have an ecological slant to them. Not only can you spend money but you can feel good about it too. I chose to eat in the downstairs café which looked out over a kitchen garden. I was seated at a table which included a couple with their female friend. I was surprised about the frankness of the discussion especially given that I was seated right next to them. When the female friend mentioned she was going to get married the man asked why and then quizzed her about when she would have children. It all seemed rather bizarre to overhear this very personal discussion. I wondered whether my French was letting me down and I was misunderstanding the entire conversation. The vegetable tart that I had was very tasty and if I was to return I would try the fresh salads that they offered. Most other diners were drinking one of their organic juices. This would have been way to healthy for me so I had a glass of rosé. I have read that in one of the other cafés you can browse the second-hand books which are for sale whilst sipping your coffee or eating. I was in a bit of a rush with lots to do so I am tempted to return to look more closely at the products that are for sale and to have a coffee in this café-bookshop.

As I exited Merci I noticed that the recently opened Stella Cadente store was opposite. I had read about it on the Freshome interior design and architecture website. With its large round window I could easily view into the store. Whilst interesting from an interior design perspective I didn't bother to enter as it was evident that they had nothing that this particular femme d'un certain age was going to wear. 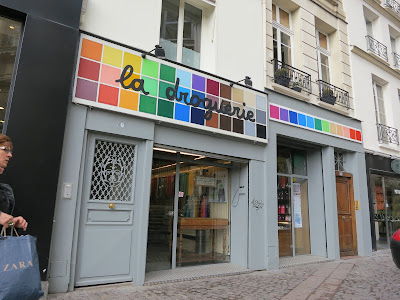 Next it was off to La Droguerie to buy some extra wool for my closest friend so she can finish a project she is working on. What an amazing store. It sells not only wool, but beads, buttons, trimmings, fabrics, patterns etc for sewing and craft projects. Unfortunately photography is not allowed in the store. It should be on everyones list to visit in Paris. Skeins of wool arranged perfectly by shades of colour greet you as you enter the shop. You feel as though you have entered Aladdin's cave. The walls are covered in some places by narrow wooden drawers with brass handles whilst elsewhere jars upon jars of beads are lined up at attention. I queued up at what I thought was the main counter. Of course I was wrong so then I had to wait for one of the wool ladies to assist me. The wool was on huge reels on shelves that extended about 3 metres high. When it was finally my turn, the lady climbed the lady and took down one of the reels which had the perfect match to my small sample. Usually they use computers to measure out the correct amount of wool but apparently the were not working so she manually feed the wool on to the wooden spring like spool. She then accompanied me to the lady in the wooden surrounded area with the cash register and passed a note to the cashier with the details of my purchase. As you would expect the shop did have a number of elderly customers but mostly it was young women in their early twenties who were making purchases.

Fraussie from Aussie in France had put me in touch with Inge from Paris Muse as Inge was looking for anglophones to trial a new guided visit. I was thrilled to be selected along with Brainy Pianist to do an Introduction to the Treasures of the Louvre tour. I arrived early so decided to treat myself to a coffee at Café Marly looking out over the forecourt of the Louvre. It was rather annoying to be ignored by the staff. Eventually my rather ordinary, lukewarm coffee arrived. If it wasn't for great location I am not sure that this café would survive. We met our guide Emma, an effervescent and knowledgable young Irish woman who had studied art history at the Sorbonne. Our tour which is aimed at first time visitors started outside the Louvre with an historical overview of the building's architecture when it was a royal palace. We visited works dating back several thousands of years before Christ from the Louvres Ancient Near East collection, through the Greek and Roman periods to those from relatively recent times from the Louvre's Renaissance Italian collection. We saw well known works such as the Venus de Milo, Nike of Samothrace and of course the Mona Lisa; Emma explained in an easy to follow way the changes and developments over the years in sculpture and painting. The tour was scheduled to take 2.5 hours but we actually spent closer to 3.5 hours showing us items, explaining what we were looking at and the associated history as well as answering our questions. If you are visiting Paris and are interested in a guided visit I can highly recommend Paris Muse. They offer museum tours and walks not just for adults but also for children and adolescents as well. Their website also includes details of their family orientated tours.

I decided to take Fraussie's advice and headed to Chez Louise. I certainly wish this was my local café. It was very cold outside but the welcome was very warm inside. I chose the carnard parmentier which was accompanied by a green salad. The glass of red wine from Burgundy that I chose was extremely good. The meal was completed by a large crème brulée perfect in its lightness and consistency. 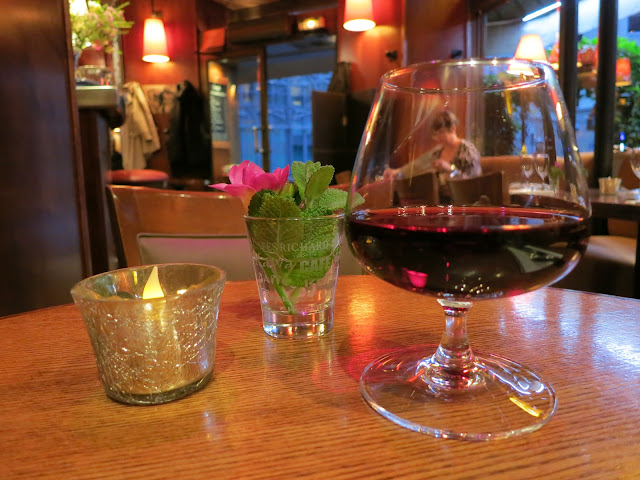