I visited Spain for the first time in 2001 as part of a whirlwind tour around Europe. I couldn't understand people who raved about Spanish food. The food served to tourists on bus trips is generally lacking flavour and unexciting. All this changed last year when I stayed with Isa and Julio in Andalusia. What a revelation.

In January this year, in addition to tapas, I was fortunate to dine in the Michelin starred Cinc Sentits restaurant in Barcelona. The restaurant showcases contemporary Catalan cuisine and is owned by brother and sister duo, Jordi and Amèlia Artal, the chef and maître d'. We contacted the restaurant via their website to book and promptly received a response.

The restaurant in Eixample was accessible by foot from Las Ramblas where we were staying. We were warmly greeted by staff and shown to our table, one of only 10 in the restaurant. Plenty of space between the tables and dimmed lighting make it an intimate spot for dining with a loved one. The decor is minimalist without being cold. It provided an ideal contrast for showing off the elaborate presentation of the dishes. The staff were very pleasant, enthusiastic and extremely knowledgeable about the dishes and the wines. Always attentive, but never intrusive, there was a sense of theatre about the service. The philosophy of the restaurant is around sourcing fresh, high quality ingredients. Staff elaborated on how they not only choose wines but regularly review them. 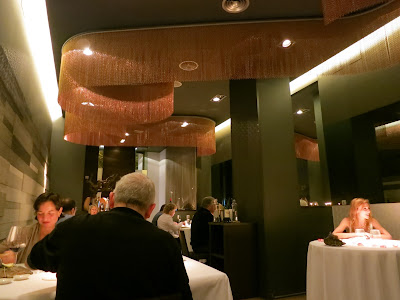 For an apéritif we chose Gran Juvé y Camps Gran Reserva, a local sparkling white wine which we really enjoyed and reasonably priced at 8€ a glass. The restaurant does not serve à la carte. We had a choice of 2 tasting menus, the 8 course 'Sensacions' and the more rustic 6 course 'Essència'. We chose the Sensacions menu and the Spanish wines to match.

After the last of our savoury dishes, our waiter brought to our table what looked like a large mint on a small glass dish. Armed with an atomiser he meticulously described the various spices and flavours of the spray. He sprayed the mint-like object which swelled to the size of my thumb. No additional cutlery was provided, so we assumed we were to eat it with our fingers. I bit into it... my teeth came to a sudden halt in this solid, fibrous mass. The waiter did well not to laugh as he explained that in fact it was a towel to wipe our fingers. Up until then, I had done a reasonable job of impressing them with my sophistication. In five seconds this was all undone. The real girl from Wollongong (an industrial city in Australia) and the naive boy from Woodenbong (rural backwater in Australia) were instantly revealed.

Each dish was truly a feast for the five senses. The wines were perfectly matched, enhancing the dishes. It was one of the most memorable meals I have ever enjoyed. I would highly recommend Cinc Sentits to those who enjoy great food, wine and service and who like to indulge. It is a very special restaurant for a special occasion.

* No photos of the amuse-guele, tapas or cheese courses.