Thanks to Fraussie from Aussie in France and Andrea at Destination Europe here are my ABCs of travel.


A: Age of first international trip: I was nearly 8 when my family moved from Australia to Papua New Guinea.  My grandparents thought we were moving to the end of the earth and that they would never see us again. I think they had notions of us being taken by head-hunters.
B: Best (foreign) beer: I have never drunk beer. I just can't get past its disgusting smell.  My husband loved trying different beers when we did a home exchange to Belgium last year.  He said it was like a revelation. Until then, he didn't know beers could be so full of flavour. He did get to try quite a few beers that year. 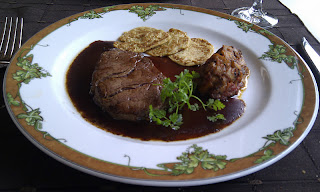 C: Cuisine (favourite): An easy one.  The word is French so it has to be French.  It doesn't have to be haute cuisine. I enjoy the home-cooked, traditional meals just as much.  The thing I love too is the passion that the French have for their food.  It is not just a fuel for the body but a central part of their culture and family life.  Have to love a country and its food when the discussion at one meal will invariably turn to the next meal. My homestay family in Rouen would start preparing for the evening meal as soon as breakfast was finished. Monsieur would go fishing, mushrooming, hunting etc.  Talk about fresh.
D: Destination (favourite and least favourite):  France is my favourite. I am a francophile through and through. For twenty-five years I longed to go to Paris.  Back then I didn't know anything about the other regions.  Finally as part of a 30 day European tour I got my wish.  Thankfully we had made the decision to add an extra week to the end of our trip so that we could do more than just sit in a bus driving past the sites.
Least favourite has to be Naples. I am sure that there are some beautiful parts in Naples but unfortunately I have not seen them. Admittedly only passed through Naples to catch the boat to Corfu.


E: Event experienced abroad that made you say “wow”: Tricky one.... toss up between the lake and countryside around Annecy, the Plitvice Lakes and the Croatian coast.  I had seen many photos of Plitvice Lakes but I had always assumed that they had been touched up and that there would be a few 'ah' moments interspersed with lots of walking.  Was quite shocked to see that it was really just as spectacular as all the photos and that every few metres there was more breathtaking scenery. See Aussie in France's Sunday's Travel Photos - Plitvice Lakes, Croatia.


F: Favourite mode of transportation:  I am not one that enjoys the getting there as much as the being there. Is first class a mode of transportation???  My list, my rules - so it is in.  Doesn't mean I have ever travelled it but I know it would be my favourite.
G: Greatest feeling while travelling: Flying into Charles de Gaulle airport in Paris.  I get very emotional. I feel that I am coming home in spite of never having lived in France although I am convinced that in another life I lived there.


H: Hottest place travelled to: I lived in Central Australia for 10 years so not sure if that counts. Otherwise it would have to be Marrakesh, Morocco.  Although it was not the peak of summer when we were there in 2011 there were a couple of days that were very hot.

I: Incredible service experienced and where:  It would have to be the personalised service that Khalid provided us at the Riad Sekkat in Marrakesh, Morocco.  He cooked for us, drove us to Outira Valley, acted as our guide - basically he helped us on the ground with every aspect of our stay.
J: Journey that took the longest:  Flying from Paris to Adelaide the trip takes 36 hours with the 15 hour stopover in Kuala Lumpur. Excruciatingly long and tedious.  There is no glamour in flying.
K: Keepsake from travels: When we were in Spain we chose a beautiful Lladro figurine that we then had to lug around Europe for the next 5 weeks. Thankfully it was packed so well in its original box that even bouncing around in the coach it didn't get damaged.
L: Let-down sight, why and where:  Everyone had raved about Florence and yet when we got there we felt let down. I suspect that it related to the extremely high expectations we had rather than there being anything actually 'wrong' with the place.
M: Moment where you fell in love with travel:  My high-school French classes with Madame Sarre.  Visions of fashionably dressed women sitting at cafés, people on bicycles carrying baguettes, French accordion music and the Eiffel Tower.  I studied Chartres Cathedral in my final school year and was determined that one day I would get there.  It took many visits to France before I got there.
N: Nicest hotel you’ve stayed in: I have been fortunate enough to stay in some beautiful hotels throughout Europe. The one I enjoyed the most was the Hotel du Panthéon.  Our room looked directly onto the Panthéon and was traditionally decorated.  Everything was like in the photos that we saw beforehand.  The staff were so kind and helpful. Since we were there in April 2011 we have sent a number of other guests there.  So far, all have been equally delighted.

O: Obsession – what are you obsessed with taking pictures of while travelling?:  Food. Although I don't limit it to just when I am travelling.  I don't know how to cook and am most appreciative and impressed by the cooking of others.

P: Passport stamps, how many and from where?:  I love the ease of travelling between European countries with the European Union but it does mean that the stamping of passports does not regularly occur.  In my new passport I have stamps from: Australia, France, Malaysia, New Caledonia, and Morocco.

Q: Quirkiest attraction you’ve visited and where:  It would have to be the tomb with heart of Richard the Lionheart in Rouen Cathedral. 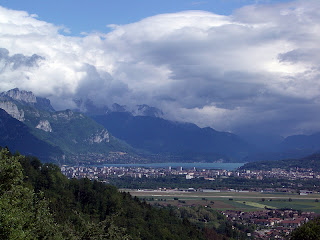 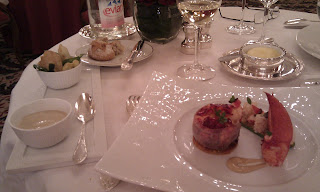 S: Splurge; something you have no problem forking over money for while travelling: Food! Last time in Paris we lunched at Le Hôtel Bristol. We didn't know about the film 'Midnight in Paris' at the time.  It was very much a last minute decision which meant that I missed out on the sense of anticipation and also was not appropriately dressed for the occasion. I think that this did impact on my overall enjoyment of the event, which nevertheless was a wonderful experience. I discovered High Tea at the Ritz in Paris and found this an affordable, enjoyable way to experience luxury surroundings.  Having read Aussie in France's '3 Places for an Apéritif in Paris'  I may try this option as an alternative for entering gorgeous locations.
T: Touristy thing done:  Lunch with folk dance and music at restaurant in Lucerne as part of bus tour.  I should have known better. Friends had warned me to stay away from anything that used the word 'folk' in it. I should have listened.
U: Unforgettable travel memory:  We decided to visit Lavaudieu in the Auvergne region of France. It is one of the most beautiful villages of France.  My husband decided that the shortest route would be the best so this is what we set the GPS on. Unfortunately it was not even a goat track.  The rocks on the path became bigger and bigger as did the holes. There was literally no room to turn with the forest hugging the sides of the vehicle.  My husband ended up getting out of the car to guide me along the path.  When we got to the other end and came out to a clearing there was a sign to tell us that vehicles were prohibited on the path.  A shame the sign was not on both ends.  Thankfully Lavaudieu lived up to its name and in indeed one of the most beautiful villages in France.  We ended up staying two nights at the beautiful bed and breakfast 'La Maison d'à côté'.
V: Visas, how many and for where?:  Only one visa - for Vietnam.  Unfortunately it was wasted.  Early in the morning of the day we were scheduled to leave Australia a typhoon hit and water came up to the ceiling of the ground floor trapping tourists in the upper level rooms.  We  have yet to get to Vietnam. 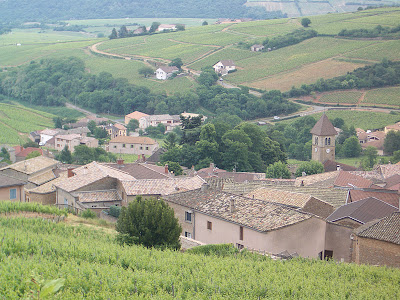 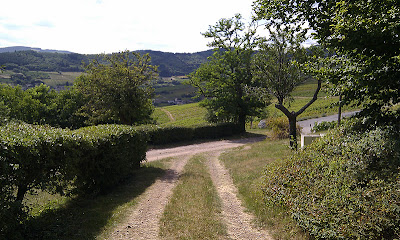 W: Wine, best glass of wine while travelling and where?:  Spent two months at a gîte at CLos de Haute Combe winery, Juliénas in the Beaujolais. In the evening would sit on the verandah with a glass of wine looking out over the valley and its vineyards.  It doesn't get much much better than that.
X: eXcellent view and from where?: My homestay familly in New Caledonia has a beach house about 120km from Noumea.  Their yard goes directly to the beach so I could sit on a log looking out at the beach.  It was total bliss.
Y: Years spent travelling?:  Nearly 35 years.... I’m not going to say as that will give away my age but let’s just say a lot but not enough.
Z: Zealous sports fans and where:  We had an apartment at Clichy on the outskirts of Paris that necessitated changing  metro lines.  We got out of the metro and were swamped and overwhelmed by thousands of football (soccer) fans beating drums, singing and yelling.  The crowd prevented us getting to the appropriate exit so we decided to out via the entrance.  We had to climb steps lugging heavy suitcases against the flow of commuters who were not impressed by our antics.  It was not a pleasant experience to say the least.

Now it is over the following bloggers who I am tagging to continue on with their own ABCs of travel: