Aborted Visit to the Musée des Tissus in Lyon 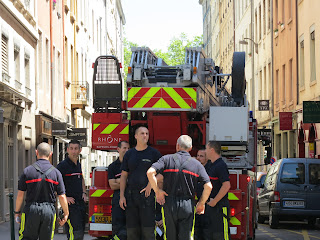 On Saturday Alain and Eric kindly invited me a lift to Lyon so that I could visit the Musée des Tissus and the Musée des Arts Décoratifs. These museums may be internationally reknown for their exhibits but their ability to deal with an evacuation last Saturday was poorly lacking. A siren went about 30 minutes into my visit. It sounded much like a car siren coming from the adjacent street. It continued however for some time and I started to become concerned so I searched for a staff member in order to clarify the situation given the lack of announcement. A very flustered attendant approached telling me to follow him quickly and get out. On the way we located 2 other visitors to the museum. They did not seem to know how many people were in the museum nor if they had evacuated all of them. The main entrance was filling with smoke and there was one staff member who seemed to be starting to panic running back and forth. Panic is probably too strong a word but although he seemed to be senior he was really out of his depth with how to handle the situation. Fortunately by this time we were safely in the courtyard.

The firemen (rather cute and well built) arrived. Still the staff at the museum did not seem to know how to handle the situation and there was no clear line of command amongst them. Eventually one of them told us we could re-enter the museum complex. At this stage the firemen were in the main building but not the museum complex itself. This advice was withdrawn by another staff member and then over-ruled yet again. I re-entered the museum with a staff member and another visitor to continue our visit. Ten minutes or so later, we were approached and asked to leave again as they needed to wait for someone else to arrive to declare it safe to re-enter. Talk about chaotic and mismanaged. The staff really had no idea what they were doing. I asked for a reimboursement but this was denied and they said just come another day in spite of my explanations that I was in Lyon for only one day and was from Australia. I have left a comment on their Facebook page and they did promptly reply that they would get back to me on Tuesday. Unfortunately it means that I still have not seen the things I particularly wanted to view in the Musée des Tissus. Perhaps next year??

I only had a cold drink at the Grand Café des Négociants but I would have to say the service was very ordinary. I was almost on the point of leaving as it took a very long time to come and take my order in spite of very few clients. Although the setting was very pretty, I probably wouldn't bother returning there. 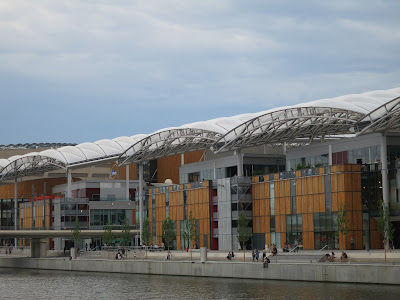 These modern buildings are located in the area known as La Confluence. It is an area in Lyon which include the port for leisure boats and is being gradually redeveloped over a number of years. The shopping centre in the larger photo has a number of rather exclusive shops that were rather fun to look at. I resisted temptation and did not buy anything.
Publié par Femme Francophile à 07:21