Béatrice, with whom I have been staying near Liège, suggested a visit to the pretty town of Spa.  Surrounded by hills and a dense forest, the Pearl of the Ardennes is not only known for its healing, iron containing water sources but also for its proximity to the Belgian Grand Prix and Les Francopholies de Spa. The francopholies is a music festival promoting francophone music. Unfortunately we were a week too early for this festival. Instead we were greeted by the thump, thump of a techno music festival. Not exactly the quiet atmosphere we were expecting.

Many of the homes in and around Belgium have the distinctive diamond shaped covering on the external walls. I am informed that they are made from asbestos and are designed to prevent moisture entering the house.


This building houses one of the water-sources. Unfortunately it was closed due to the music festival so we were unable to fully visit it. 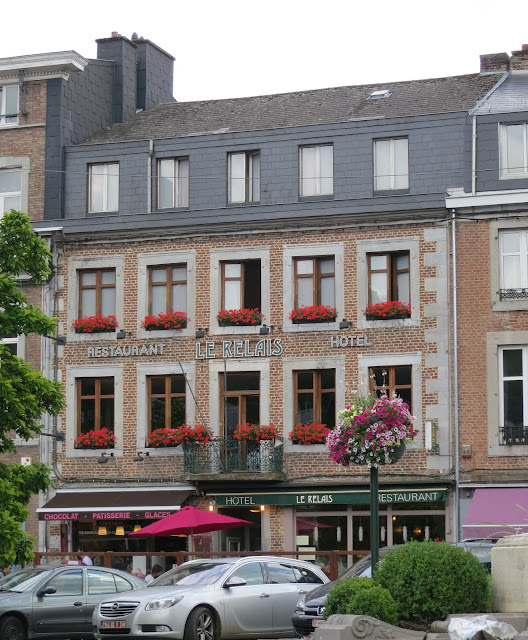 Deciding to leave the thump, thump behind in Spa we headed for Lac de Warfaaz. The lake is the result of a barrage built in 1892. Historically bourgeois families would travel from Spa in their horse-drawn carriages and then do a tour around the lake. It is now a destination for fishermen looking for trout and salmon as well as people wanting to enjoy the beautiful setting. The lake is surrounded on one side by a steep forested hill with the occasional chateau visible. Again we did not get to enjoy the promised tranquility of such an idyllic spot. Instead we were greeted by children on a holiday camp who were enjoying water activities along with the usual associated skylarking. We managed to console ourselves with a glass of champagne by the edge of the lake before heading back to Liège with the car rooftop down enjoying the sunshine.
Publié par Femme Francophile à 04:43