Marseille being only 37 minutes by fast train ( Train Grande Vitesse - TGV)  from Avignon provided me with the opportunity to spend a day visiting this famous large French port. I had been reluctant to visit it following lengthy discussions in a French class many years ago. We talked about Marseille having the highest crime rate of all cities in France. Since then, I have heard stories of people being robbed whilst they are in their car or walking in the street. Of course these things can happen anywhere but for some reason these negative images remained. French friends warned me to remove all jewellery, apart from costume jewellery, prior to visiting as I would risk having it forcibly removed.  Marseille is one of the two 2013 European Cultural Capitals, so time to face my prejudices and visit.
Arriving at Saint-Charles railway station, I found it easy to navigate the metro (only 2 lines) to the old port ( Le Vieux Port ). Guidebooks and friends suggest it is a good place to start any visit to Marseille. It is only 10.30am but sweat is running down my neck. I am eager to visit the Musée des civilisations de l'Europe et de la Méditerranée, MuCEM for short. I understand that the exhibitions are poorly curated and being on a limited timeframe I decide to just visit the buildings and grounds. An added bonus is that it is free. MuCEM is made up of 3 buildings, 2 of which are at Le Vieux Port. components. Fort Saint-Jean, the 12th century fort, is joined to the architectural marvel, J4, by an external walkway which goes across the sea. It looks rather box-like to start with and then you start to see its true beauty with the play on light and shade. It is topped by a Mediterranean garden and the open cement work allow the sea breezes to cool the ramps that spiral around the building. They also allow visitors to enjoy the views.
Unfortunately the signage from Le Vieux Port for pedestrians doesn't indicate the path to take to enter via the fort. It was only the mass of people crossing the road to mount some steps that gave me any clue. The fort offers views over the old port which is now predominantly filled with pleasure craft that range from small modest traditional wooden boats to large yachts and sailing. The port is much much larger than I was expecting. The port is lined with restaurants and cafes that seem to all offer almost identical menus. Surely a tourist trap? I tried to find a café with locals in it. A group of business people with their lunch tickets seemed to be a reasonable indicator of people eating locally. The moules (mussels) marinières were very tasty but the glass of rosé was disappointing.
From the port I took a 2 hour Calanques Essentials boat trip. For some reason they require people to arrive 45 minutes early. We all dutifully lined up in the sun until shortly before the designated time we were allowed to board. The commentary is only provided in French but booklets are handed out in a variety of languages. Unfortunately it is not very clear to non French speakers the locations making it very difficult to know which information in the booklet is relevant. The commentary in French  however was very interesting and well presented. The boat trip was very reasonable at only 22 Euros and probably the highlight of the day.
The last bit of tourism I managed to squeeze in was to visit the basilica of Notre-Dame de la Garde. This church perched high on the hilltop is hard to miss from just about anywhere in the main city area. It looked too high and too far for me to manage accessing by foot. It is the most visited site in Marseille according to the tourism office. The 360 degrees view is outstanding so even if you are starting to feel churched out it is worthwhile. If not 'churched' out, you will enjoy the beautiful decoration within the church. I would recommend taking bus number 60 rather than Le Petit Train (tourist train that goes through the streets) to visit the church. There were long queues to get on Le Petit Train at Le Vieux Port, and again at the church. People were getting rather impatient standing in hot weather as train after train arrived but there was inadequate room to take all of the waiting passengars. You do of course miss out on the commentary.
Whilst waiting for my train to go back to Avignon, I called into a neighbourhood cafe. Cafés around railway stations often leave something to be desired. This one was even worse than usual. The photo below shows the powerpoint that they suggested I could use to recharge my phone. Yes, it worked. Rather desperate, I decided to use their toilet facilities as I thought they would be cleaner than those at the railway station. WRONG!! No photos for this. 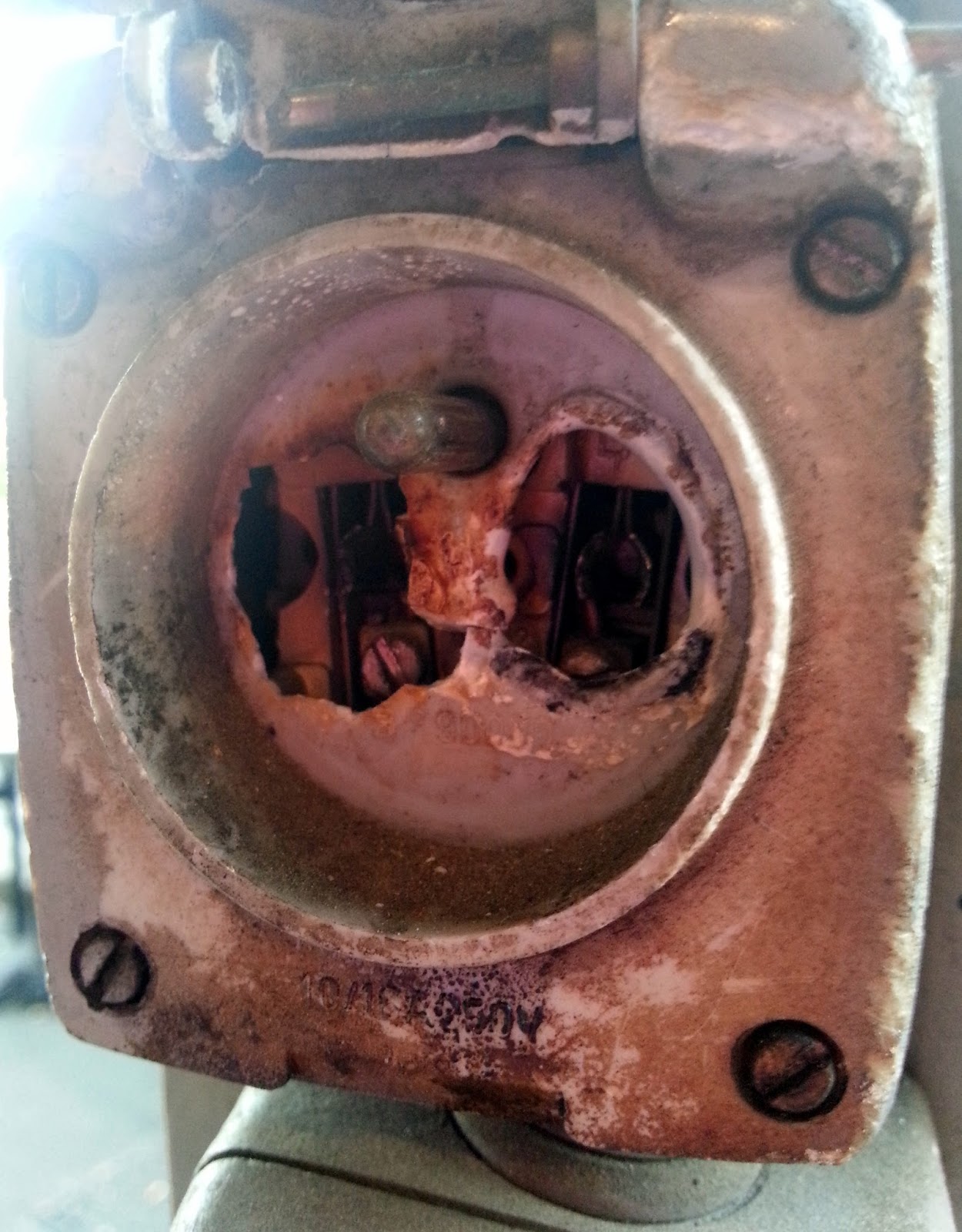 Unfortunately my day didn't quite end as I planned. I missed the last train to where I parked the car. This meant a train to another station and then a bus. What should have taken 37 minutes took more than 2 hours. I will certainly be more careful next time.

Would I go back to Marseille?  Yes, I would. I feel that there is a lot more to see and that I was trying to squeeze too much in to the one day. I really would like to explore the areas around the city and to swim in the Calanques etc.